2013 among top 10 warmest years: a civilisational response is urgently required

Can you see a pause in the warming of the planet?

At this point many commentators, scientists and bloggers will say “Well look at that. We told you the planet is warming.” Of course those that deny climate change will mutter about conspiracies, the “pause in warming” and such nonsense.

But let us move well beyond that conversation, cherry picking of facts and the finger-pointing that takes place every time a press release such as this comes out.

When I look at this graph I see a planetary and civilisational emergency. I see a looming catastrophe if we don’t begin advanced planning.

What I see is the urgent need to examine how we adapt to a changed climate.

Many hard decisions are before us.

Time to consider our options.

The Fox Effect: Murdoch’s patronage of deniers and his war on science 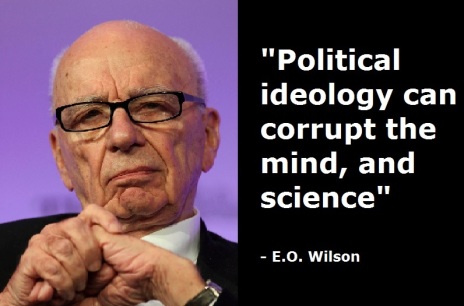 A new study published in the journal Public Understanding of Science (PDF available here) surveyed a nationally representative sample of over 1,000 Americans in 2008 and 2011 about their media consumption and beliefs about climate change.

The study is here:

The “War on Science” has been running for decades, and it is time to call to account Rupert Murdoch.

It is now clear the climate sceptics would have remained far more marginal had it not been for Murdoch’s patronage.

As I wrote earlier this year:

Rupert Murdoch’s News Limited, which controls 70% of the Australian print media, are without doubt doing the Australian public a great disservice with their constant stream of climate disinformation.

It is not enough for News Limited to shape the narrative as “believers versus sceptics”, thus creating a sense of false balance. They take it a step further by willfully distorting the public’s perception about the causes of climate change while simultaneously undermining their trust in the scientific community.

Why is it that Fox News, The Australian, The Wall Street Journal and all other organs of the Murdoch empire are unanimous in their contempt for the science? Consider this…

The climate debate, from Murdoch’s perspective, is as much about forestalling action as it is about Rupert Murdoch.

It is about Murdoch’s king making and opinion making abilities. It’s about his power. It is about how much he has, and how effectively he can wield it.

It is about how media power shapes the conversations we have in political debates, around the proverbial water cooler and over the BBQ on a Sunday afternoon.

How much does it say about the power of Murdoch and News Limited (which fervently believes it can shape the tone of all political conversation within our nation) that it can no longer control the debate or public perception on climate?

What does it mean when public opinion slips from the control of the opinion makers?

Lose the ability to shape the debate, and you lose the kingdom.

All empires are fictions and all power is perceived.

This is especially the case today with the internet reshaping the media, rendering the traditional gatekeepers less relevant than they once were.

A king-maker who has built his empire on public perception, mass entertainment and sports broadcasting understands this intuitively.

From the Tampa Affair, the denial of the Stolen Generations and the climate debate, Murdoch has sought to shape our nation and values for decades.

Does it come as a surprise that public respect for the media in Australia is at all-time low? This is not a coincidence, nor some chance correlation.

News Limited’s reporting on climate change is at odds with people’s everyday experiences of a changing planet. Should you believe Andrew Bolt or the evidence of your home burning to the ground over Australia’s “Angry Summer”?

In response to the Cook et.al paper, the sceptic movement is going into a tailspin of denial. They’ve also started their desperate attempts to wave away the evidence.

Anthony Watts and Steve Miloy over at JunkScience.com are leading the sceptic charge in trying to discredit the paper.

According to our intrepid duo, only 32.6% of the papers surveyed by the Cook paper made a positive statement that climate change was human induced. In Watts word the maths is “borked”.

Everyone take a deep sigh…

First the methodology is very clear.

To quote from Skeptical Science:

We found that about two-thirds of papers didn’t express a position on the subject in the abstract, which confirms that we were conservative in our initial abstract ratings.  This result isn’t surprising for two reasons: 1) most journals have strict word limits for their abstracts, and 2) frankly, every scientist doing climate research knows humans are causing global warming. There’s no longer a need to state something so obvious. For example, would you expect every geological paper to note in its abstract that the Earth is a spherical body that orbits the sun?

This result was also predicted by Oreskes (2007), which noted that scientists

However, according to the author self-ratings, nearly two-thirds of the papers in our survey do express a position on the subject somewhere in the paper.

The reason all those thousands of papers do not need to make a positive or negative statement is that it is assumed climate change is happening.

Why restate the obvious? How many papers in astronomy start with “As many people know, the Earth orbits the sun….”

Some things are just that obvious – the same here.

Those pushing the “But it’s only 32.6% thus no consensus!” argument are failing to understand a methodology routinely applied across multiple disciplines – not just in this paper.

This is not hard stuff: this is basic statistics. Basic science. And well, just basic.

Like at the early-high-school level. It is not hard to understand unless you really, really don’t want to understand.

Anyone claiming to have any degree of numeracy above the level of basic addition will appreciate this methodology.

But I suspect Steve and Anthony know this: they’re not dumb.

But it is an intellectually dishonest argument.

Take a good look in the mirror sceptics: ask yourself just how badly you don’t want this fact be true.

To what depths does one has to go in order to deceive a) themselves and b) others.