In Heartland’s proposed budget for 2012 two Australian scientists are listed under the program to “undermine” the credibility of the IPCC’s reports.

As noted, Bob Carter would have potentially received over $1600 per month to work on this project.

Also listed is one Susan Crockford – at the University of Victoria* (CA – edit) – who would potentially receive $750 per month.

Crockford is an adjunct assistant professor at the University of Victoria (Canada – edit):

As Heartland’s own documents show, they sponsor the “Nongovernmental International Panel on Climate Change” (NIPCC) whose sole role is to undermine the work of the IPCC.

They brazenly state it’s purpose in their 2012 Strategy Paper:

Heartland is part of a growing network of groups working the climate issues, some of which we support financially. We will seek additional partnerships in 2012. At present we sponsor the NIPCC to undermine the official United Nation’s IPCC reports and paid a team of writers $388,000 in 2011 to work on a series of editions of Climate Change Reconsidered. Expenses will be about the same in 2012. NIPCC is currently funded by two gifts a year from two foundations, both of them requesting anonymity. Another $88,000 is earmarked this year for Heartland staff, incremental expenses, and overhead for editing, expense reimbursement for the authors, and marketing

Note they call the team “writers” – they’re not actually conducting scientific research. They are producing crude propaganda that seeks to undermine the IPCC and work of scientists.

In the proposed 2012 budget both Carter and Crockford are listed as writers for this project, and are among those recruited by one Craig Idso

The two tables below summarize the multi-year budget for the project and personnel costs for the Nongovernmental International Panel on Climate Change (NIPCC), an international group of scientists that produces critiques of the reports of the United Nation’s IPCC. Heartland hosts and funds the effort. A growing number of scientists have been recruited by Craig Idso to be contributing authors and editors of NIPCC’s major reports, a series titled Climate Change Reconsidered.

See page 8 of the 2012 proposed budget where Crockford is listed: 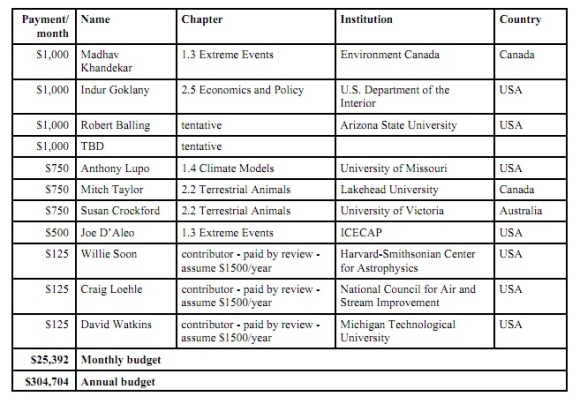 Crockford has already been involved with the denial movement:

It has been long been suspected that this is how the denial machine works.

Now the evidence is starting to flood in.

* Crockford is listed as an Australian, but is associated with a Canadian university. I was aware of this, but did not make explicit her Canadian connections in the post.