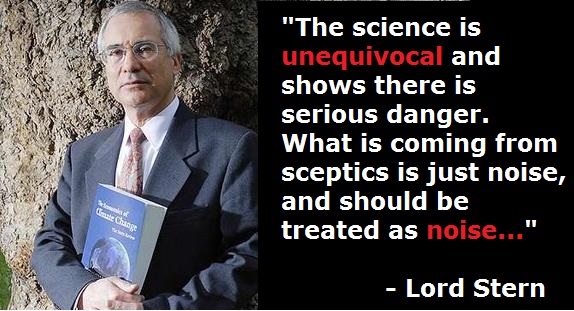 Fiona Harvey of The Guardian interviews Nicholas Stern (of the Stern Report fame):

Lord Nicolas Stern told the Guardian: “It is astonishing, irrational and unscientific to suggest the risks are small. How can they say they know the risks are small? The clear conclusion from 200 years of climate science and observations show a strong association between carbon dioxide rises and global surface temperature.

He added: “The science is unequivocal and shows there is serious danger. What is coming from [sceptics] is just noise, and should be treated as noise.”

He said some sceptics were in the pay of hostile industries, with a vested interest in contradicting the science, and were being “deliberately naive” in claiming the world could wait decades to deal with rising emissions.

“It (the sceptic response) looks very well-organised,” he said. “They are deliberately distorting the way we understand risk.”

Stern said: “There is the danger of an abrupt change in the whole [climate] mechanism. We need to approach the issue as one of risk management.”