The flooding in Queensland and New South Wales was a devastating and record breaking. Despite claims that increased rainfall somehow disproves the reality of climate change, such extremes are to be expected in a warming world. Seth Westra of the University of Adelaide has a good article on the topic which I’ve republished below. Note, it originally appeared on The Conversation. – Mike @ WtD

Rainfall extremes are increasing around the world, and the increase is linked to the warming of the atmosphere which has taken place since pre-industrial times. This is the conclusion of a recent study which investigated extreme rainfall trends using data from 8326 weather-recording stations globally, some of which have records spanning more than a hundred years.

Of all the stations analysed, we found that two-thirds showed increasing trends over the course of the 20th and early 21st centuries. When we looked at the association between the intensity of rainfall extremes and a record of global mean near-surface atmospheric temperature, rainfall intensity was found to increase at a rate of between 5.9% and 7.7% for each degree, depending on the method of analysis.

This kind of change is precisely what can be expected if one assumes that the intensity of the most extreme rainfall events will scale with the capacity of the atmosphere to hold moisture. This is well known to increase with temperature at a rate of about 7% per degree.

Looking beyond globally averaged numbers, however, we also found distinct regional differences. The greatest increases occurred in the tropical belt; the smallest in the drier mid-latitudes where you will find most of the world’s deserts. In the higher latitudes, particularly in the northern hemisphere, the rate of change was close to the global average. Again, such changes seemed to be in quite close agreement with what global climate models say should happen as a result of global warming: a reassuring case of observations confirming theory.

The implications of this are likely to be significant for flood risk around the world. It’s true that 7% per degree doesn’t sound like much. But if we continue to follow the current trajectory of greenhouse gas emissions, we can probably expect in the order of three to five degrees of warming by the end of the 21st century. If the relationship between extreme rainfall and atmospheric temperature continues to hold, then this could mean as much as a 35% increase in extreme rainfall intensity on average globally.

What does this mean for the capacity of our infrastructure to handle current and future floods? Most flood-defence infrastructure, such as dams, levees, stormwater systems and coastal flood defences, has been designed to handle historical flood risk. If the risk of flooding increases, then such infrastructure will have increasing difficulty managing floods in the future. This would either lead to increased damage costs due to the flooding, or necessitate expensive infrastructure upgrades or resettlement of low-lying communities. Even the increase in extreme rainfall intensity observed thus far is likely to lead to substantial challenges for some existing infrastructure.

Nevertheless our analysis should not be interpreted as suggesting that the rapid increase in flood damage which has occurred over the past few decades is entirely attributable to climate change.

In fact, other changes such as deforestation, rapid urbanisation and an increase in the number of people living in flood plains are likely to account for the bulk of these changes. Furthermore, not all floods are caused by extreme rainfall events. Snow melt and storm surge also contribute to overall flood risk. Antecedent moisture – the wetness of the catchment prior to the flood-producing rainfall event – can also have a substantial influence on flood risk. In some parts of Australia this might even cause flood risk to decrease because of an expected increase in the number or severity of future droughts.

Despite all these caveats, our recent study contributes to the debate on how climate change will affect flood risk, by showing that the intensification of rainfall extremes is not just a projection made by climate models. Rather, it can already can be detected in our observational record.

This article was originally published at The Conversation.
Read the original article.

Storm surges: we ain’t seen nothing yet?

Tamino’s Open Mind remains one of the “must read” climate blogs – a recent post on hurricanes and storm surges is well worth reading:

One of the difficulties studying changes in the frequency and intensity of cyclones is that the record of past storms is inhomogeneous, due to changes in observational capabilities and how storms have been measured and recorded. But a new paper by Grinsted et al. has found evidence of past cyclone occurrence in the western Atlantic which impacted the U.S. east coast, evidence which is homogenous over a period of nearly a century, by studying not storm records, but surges in sea level recorded at tide gauge stations.

The Grinsted paper is well worth noting, and includes the following graph: 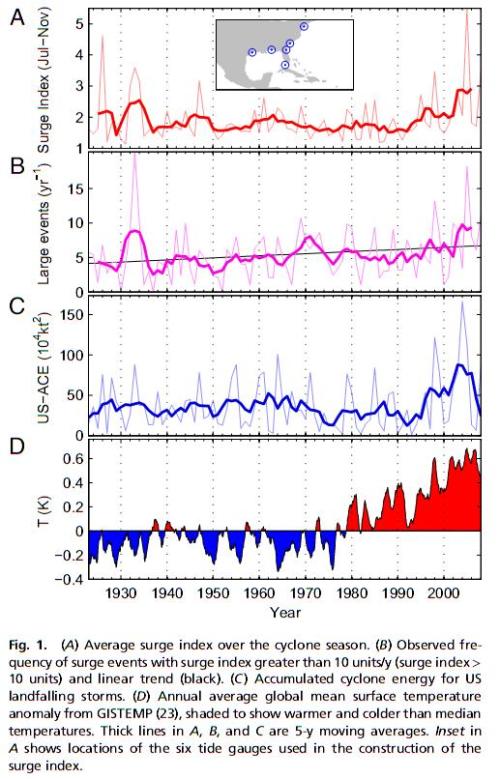 Note the correlation between a) surge events b) frequency of surge events c) accumulated cyclone energy and d) annual average global mean surface temperature between the late 1920s and this century (in particular note the period post 2000).

The globe is warming, and the climate is changing. Signal from the noise.

Tamino once again proves to be a valuable guide to the science, noting:

In my opinion, Grinsted et al. have identified an important and reliable indicator of landfalling storms in the U.S. southeast, and have found clear (and statistically significant) evidence of increase in activity over time and association with warmer temperatures. As the world continues to warm, expect the trends to continue.

I concur: these trends will continue.

On the flooding of the WTC memorial site: “After the horrible events of 9/11 we said never again. But this is what would happen…”

Al Gore’s did much to raise awareness of climate change with his film An Inconvenient Truth –which obviously explains the relentless war on the film and attempts at character assassination.

In a scene that now seems eerily prescient he demonstrates how rising sea levels and storm surges would impact different parts of the globe.

At one point the film shows the flooding of the WTC memorial site (go to 2:20 of clip): 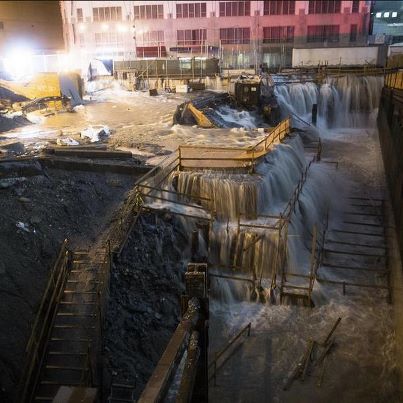 Today NYC stand battered, flooded and reported deaths at around 39.

Video of National Guard searching for residents in New Jersey, note the scale of the devestation:

A house is destroyed by the force of the storm:

The New Normal (Part 24): Forget everything you know about storms, Sandy is different

Via The Weather Channel:

Via The Weather Channel:

The storm will cover the entire eastern sea-board of the United States and extending into Canada:

Australia 2070: we won’t recognize the environment according to CSIRO

The CSIRO has recently released a report (see here) on how climate change is going to radically impact the Australian environment. Even News Corporation publication The Herald Sun – home of Andrew Bolt – is reporting:

And the study’s lead researchers fear Australians may not be ready to accept the new way their country may soon smell, sound and look.

The Commonwealth’s science and research body has produced the first “Australia-wide assessment of the magnitude of the ecological impact that climate change could have on biodiversity” and how the changes could be managed.

It says totally new environments will emerge while others vanish and there will be a decline in forest environments, which will give way to shrubs and grasslands.

“Climate change is likely to start to transform some of Australia’s natural landscapes by 2030,” said lead researcher Dr Michael Dunlop, from the CSIRO’s Ecosystem Sciences division.

“By 2070, the ecological impacts are likely to be very significant and widespread.

“Many of the environments our plants and animals currently exist in will disappear from the continent. Our grandchildren are likely to experience landscapes that are very different to the ones we have known.”

The changes will be so profound that they will have major implications for management of the environment and, in particular, Australia’s national parks and nature reserves.

“If future generations want to experience and enjoy our distinctive plants and animals and the wonders of the Australian bush, then we need to give biodiversity the greatest opportunity to adapt naturally in a changing and variable environment, rather than trying to prevent ecological change,” Dr Dunlop said.

The study identified a range of management options, including ensuring there is plenty of habitat of different types available for plants and animals.

“But one of the biggest challenges could be the community accepting the levels of ecological change that we could experience,” Dr Dunlop said.

There has been a steady chorus arguing for adaptation measures and planning to begin immediately. This is not to take away from the issue of mitigation – reducing CO2 emissions.

But the truth – the hard, scary, ugly truth –  is that we are going to overshoot safe boundary limits.

Via the Guardian – no reported deaths thankfully:

At least 85,000 people in Burma have fled their homes as the worst monsoon flooding in years submerged hundreds of thousands of hectares of rice fields, a government relief official has said.

Stunning, and tragic: the worst flooding in Manila’s history:

The new normal (part 7): “A whole year’s worth of rain fell on parts of the island…”

Via the BBC, rains and flooding continue to lash Japan:

This time it is Japan in “unprecedented rains”:

ALMOST a quarter of a million people have been ordered to leave their homes in southwest Japan as heavy rain pounded the area for the third day, with 20 already dead, officials and reports say.

The Japan Meteorological Agency warned of more landslides and floods on the main southern island of Kyushu as rainfall of up to 11 centimetres an hour was recorded early on Saturday.

Evacuation orders had been issued to about 240,000 people in the north of Kyushu where more rivers burst their banks, public broadcaster NHK and Jiji Press news agency reported, compiling figures from various authorities.

They were told to go to designated shelters such as schools and other public facilities, while more people were advised to leave their homes.