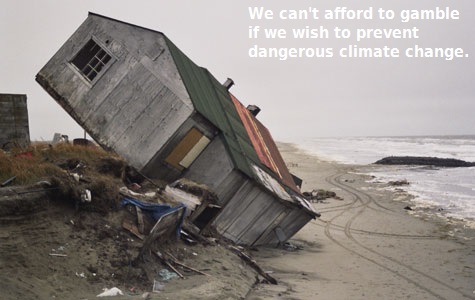 There has been a rash of articles of late claiming the next IPCC report (AR5) will revise the temperature response to increased levels of atmospheric CO2 downwards. Turns out this is not the case, but more on that soon.

This is what I like to call “The Great Climate Sensitivity Debate of 2013” in which we all rushed out to understand what this once obscure branch of science was about.

The message from the deniers and some sections of the media was that the silly scientists had gotten it wrong, and that the consensus was shifting towards “Things aren’t as bad as we once thought.”

Perhaps the most notorious example of this “bright siding” was this article from the The Economist.

Panicking us for 30 years only to say “Oops sorry guys we waz wrong! So sorry – our bad!”

Seems this whole flap over climate sensitivity was a pointless distraction, as New Scientist notes:

Can we all stop worrying about global warming? According to a recent rash of stories in the media, the “climate sensitivity” – the extent to which temperatures respond to more carbon dioxide in the atmosphere – is lower than expected, and thus that the world won’t get as hot as predicted. One story, in The Economist, based on leaked information from a draft of the next assessment by the Intergovernmental Panel on Climate Change, claims the IPCC will revise its sensitivity estimate downwards when they release their official report this September.

Turns out climate change is still dangerous and something we may wish to prevent:

The bottom line is that there is no new consensus that climate sensitivity is lower than previously thought, says Knutti. The observed trend points to lower values because of the recent slowdown, but other evidence continues to support higher values.

The last IPCC report stated that equilibrium climate sensitivity was between 2 and 4.5 °C, mostly likely 3 °C. The Economist claims the IPCC’s next report will give a figure between 1.5 and 4.5 °C, with no most likely value. The IPCC won’t confirm or deny it, but it’s not a huge change if it is true.

“What matters for avoiding dangerous climate change is the upper end, and that hasn’t changed,” says Knutti. Ward makes the same point. “We can’t afford to gamble on sensitivity definitely being low,” he says.

But will it all be a huge waste if sensitivity does turn out to be low? Far from it. If we don’t cut emissions, Knutti points out, all low sensitivity means is that it will take a decade or two longer for the planet to warm as much as it would if sensitivity was high. “It doesn’t get away from the fact that emissions have to be reduced,” he says.