6 Comments
By Mike Marriott 350.org, Bill McKibben, Call to arms, Do the maths

Bill McKibben and moral leadership: Do the Maths tour, Melbourne 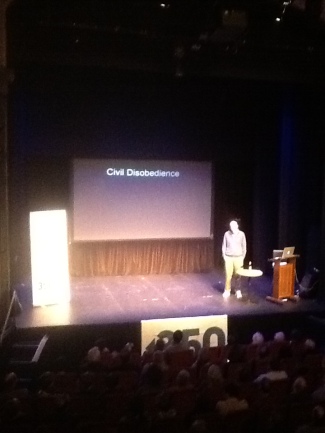 “The Arc of the Moral Universe Is Long, but It Bends Toward Justice” – Martin Luther King

Bill McKibben is a dangerous man.

At least to those wanting to stall action on climate change and deny the reality of a warming planet. He is dangerous to those who wish to extract every last drop of oil and piece of fossilized carbon in the ground.

He is dangerous to those who would trash the planet, and deny future generations the right to inherit a habitable Earth.

He is dangerous because what he says not only makes sense, but is powerfully articulated.

He is dangerous to vested interests because he is bringing organisation to the fractured and disparate environment movement.

And because Bill McKibben is so dangerous to the deniers, the fossil fuel industry and Murdoch’s media empire we should do everything we can to help Bill and 350.org.

It is almost impossible to capture my feeling about his talk last night, but Bill McKibben demonstrated something critically lacking within Australian politics.

McKibben does not aspire to lead, but to inspire others and bring out the best within us.

Stepping onto the stage, you could see how tired he is. And yet when he spoke he was animated, passionate and at times incredibly witty. This was no fire-and-brimstone speech: Bill spoke quietly, respectfully and with humility.

I believe I witnessed something incredible last night. The coming into being of a transnational social justice movement.

Bill McKibben is a dangerous man.

Thank god for that.

See the following and spread the word:

6 thoughts on “Bill McKibben and moral leadership: Do the Maths tour, Melbourne”