An amazing story of survival during the recent Tasmanian fires, but first the images: 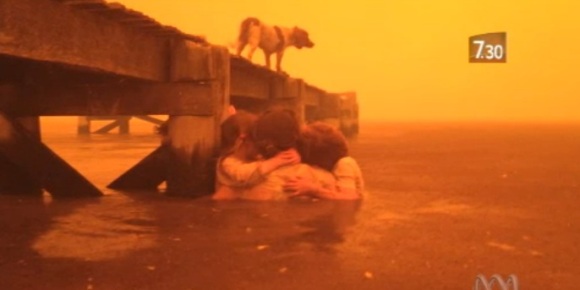 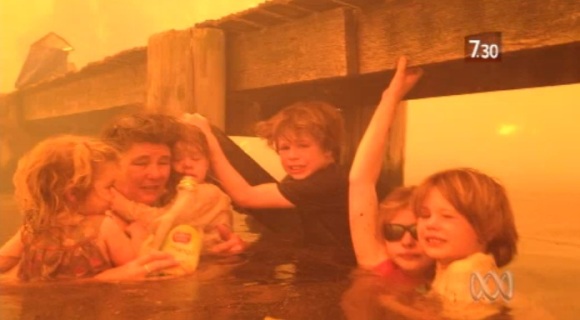 From the ABC’s 7.30 Report, transcript below:

BONNIE WALKER’S DAUGHTER: It came from both directions. It came at us and then from the side.

TIM HOLMES: I ended up having to run down through a wooded area on my own, where there was so much smoke and fire, I didn’t know where I was. So I just kept running.

There was a moment of fear that this could be very, very dangerous. But I managed to run through and get to the water’s edge, which was a kind of a sanctuary.

BONNIE WALKER: A few minutes later, an image arrived which was really – it’s still quite upsetting to see the image, it’s all of my, our, five children underneath the jetty huddled up to neck deep sea water which is cold, we’ve swam the day before and it was cold.

So I knew that that would be a challenge, to keep three non-swimmers above water. And with only my mum and dad and our eldest daughter.

BONNIE WALKER’S DAUGHTER: Even though there was hot ash and everything all over us, it was still cold.

TIM HOLMES: We were relying on the jetty really. And the difficulty was, there was so much smoke and ember and there was only about probably 200mm to 300mm of air above the water. So we were all just heads, water up to our chins just trying to breathe because it was just, the atmosphere was so incredibly toxic.

BONNIE WALKER: That was a very perilous time.

TIM HOLMES: And it raged for three hours. Because there was a lot of sort of – well, it was a wooded point. So everything was on fire and it was just exploding all over the place. Yeah, amazing. Just scorched.

BONNIE WALKER: My father rallied against all odds and managed to go up and get a little dinghy off the foreshore. Loaded our children in and my mum and then dragged it into a headwind 200m or 300m around the point into the headwind. And got them to safety so that they weren’t breathing the polluted air.

JAMES BENNETT: After a sleepless night at the Dunalley Hotel, late on Saturday, the family is ferried back to safety by sea rescue volunteers.

BONNIE WALKER: I spent a lot of time with good friends and prayed like I’ve never prayed before and I think those prayers have been answered.

BONNIE WALKER: Yes Charlotte. Those prayers have been answered.

JAMES BENNETT: They’re right in front of you.

BONNIE WALKER: Right in front of me.