If Andrew Bolt rejects the Galileo Movement, what about it’s parton Alan Jones? 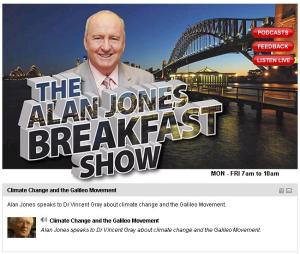 Can Alan Jones explain the statements by Malcolm Roberts?

Remember the Galileo Movement, the sad collection of cranks and conspiracy theorists?

Well it seems it’s too extreme for Andrew Bolt who has distanced himself from them:

Your conspiracy theory seemed utterly stupid even before I knew which families you meant. Now checking the list of banking families you’ve given me, your theory becomes terribly, shamefully familiar.

Two of the three most prominent and current banking families you’ve mentioned are Jewish, and the third is sometimes falsely assumed to be. Yes, this smacks too much of the Jewish world conspiracy theorising I’ve always loathed.

Again, I insist: remove me from the list of people you claim are prepared to advise you. I’ve never advised you, Malcolm, and would never want to. I am offended to be linked to you.

The question remains: what about the movements patron, Alan Jones?

See Jones speaking for the group in this video.

Here is Jones speaking to Dr. Vincent Gray on his radio show.

The movement was also mentioned on Jo Nova’s blog.

We’ve heard a lot about “freedom of the press” lately Mr. Jones, but I think we’d very much like to talk about the responsibility that comes with that.

6 thoughts on “If Andrew Bolt rejects the Galileo Movement, what about it’s parton Alan Jones?”