Locking in the march of folly: of herding, theories about greater fools and Australia’s coal rush (part 2) 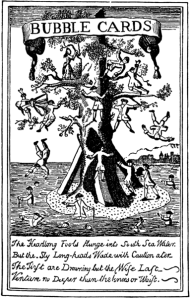 The end of the coal bubble

We are at the top of the peak for fossil fuel extraction and as a source of energy: coal included.

Prices may continue to rise for a decade or more as demand for energy intensifies, but this is nothing more than speculative bubble that will spectacularly collapse.

How do we know this?

Apart from diminishing reserves the mother of all market corrections is coming: the climate is changing faster than anticipated.

Picture the world in but three decades with an additional 2c warming, a future in which the current heat wave devastating North America will be regarded as a mild summer.

In this scenario, coal prices will slam into the reality of climate change experienced by billions and collapse. Coal’s one advantage, the perception it is cheap and plentiful, will be seen more as a curse than a boon.

In this scenario the state of coal reserves will not matter becomes irrelevant. There is little doubt climate change will generate a range of policy initiatives to quickly – desperately – phase out coal and fossil fuel usage.

Countries will abandon coal as part of a massive mobilisation endeavor to mitigate rising temperatures. Treaties will come into place to slow and halt the extraction of coal. Billions of funding will pour into alternative sources of energy.

And if market friendly mechanisms fail to spur countries to switch from coal to renewable sources, we can expect economic sanctions against countries refusing to cease coal production.

In years to come, those soon to be opened coal mines and their supporting infrastructure will be seen as nothing more than monuments to folly.

The greater fool theory at play: coals future is limited, but the rush to exploit goes on

Expanding coal production is like betting your future on the tobacco industry.

Perhaps you might choose to ignore the health risks, the suffering of those with cancer or strain on the public funds for the short term.

But ultimately reality catches up.

The IEA has warned we are “locking in” dangerous climate change by betting on fossil fuels as a future source of energy:

Yet, despite intensifying warnings from scientists over the past two decades, the new infrastructure even now being built is constructed along the same lines as the old, which means that there is a “lock-in” effect – high-carbon infrastructure built today or in the next five years will contribute as much to the stock of emissions in the atmosphere as previous generations.

We seeing is the last throw of the profit-seeking dice: “Hurray! Dig it up before we can’t sell it any more!”

Because for the next 10 years or so there will be enough greater fools willing to dig up coal and sell it. But that too will have to stop. It’s inevitable.

But this will be a problem for the future, and is in no way reflected in next week’s opinion poll or babbling anxieties and concerns of the last market focus group.

So where does this leave us?

Locked into the march of folly.

History is unkind to fools

Our political and business elites have chosen to not only sacrifice their interests, but a liveable climate.

Gillian King at the blog “Thisness of that” writes perceptively about that failure. Inaction is not the fault of scientists – they’ve simply provided information – but with politicians:

What more can climate scientists do and say? They conduct the research and publish the facts. Their institutions have prominent websites about climate change (CSIRO, BOM, PIK, Met Office, NASA, NOAA, and more) and individual scientists have published books, websites and blogs aimed at general audiences…

As I’ve stated many times, the problem is not that of our leaders are suffering form a case of information deficit.

The most privileged members of our society – politicians, business leaders, sections of the media and yes, even some in academia – have consciously and willingly ignored the issue.

Here’s a fact: they have all the data, projections and information at their fingertips. They have the means to influence the debate and the ability to implement policies that address climate change.

But a choice has been made; to ignore, to obfuscate, to deny and to pass the problem onto future generations.

One only has to look at the antics of the Australian leader of the opposition, Tony Abbott to see the choices our elites our making.

Abbott is currently touring Australia, popping up in supermarkets and fish shops claiming Australia’s very modest attempt at climate change mitigation (the so called carbon tax) will be the ruin of us all and promising to “axe the tax” the moment he gets into office: 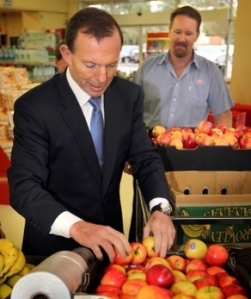 Is it possible for the “climate change debate” in Australia to become even more insipid?

Here’s a suggestion Mr Abbott: have a look at the 40,000 local temperature records that have been broken in the USA this year. Or perhaps the flooding that has displaced millions in India:

Believe me; paying a few extra cents for my groceries seems a good trade off compared to the alternatives.

With that in mind, I cannot but help ask “Have men like Abbott no shame?”

History is unkind to fools, no matter how clever or successful they are in the short term. The passage of time and the unfolding of events will inevitably showcase the failings and poor decision making of elites who have sacrificed not only their interests, but those they claim to lead, in return for short term gains.

Across a broad spectrum of politics, business and the media we already recognise just who the fools are.

We already know their names.