Army of darkness: 33% of Americans think the sun goes around the earth

[Hat tip “Why evolution is true”]

Sometimes all you can do is weep: 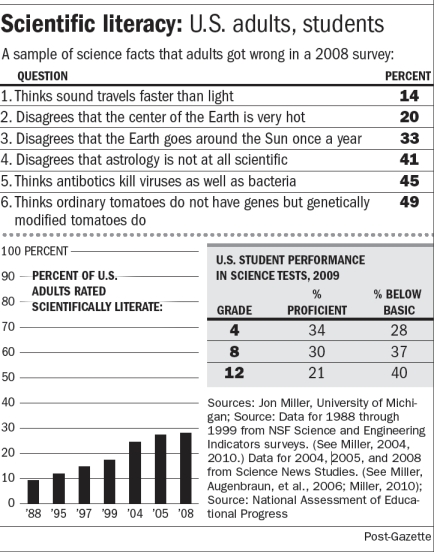 While I don’t want to engage in simple “American bashing”, it is rather terrifying to think that one-third of Americans believe in a geocentric universe. [1]

Creationism and the denial of climate change have become party platforms of the right-wing/conservative/Republican views since the 1980s.

This is the price American society pays for the so called “culture wars” that have been running since the 1980s under Reagan.

This is the product of the long running “war on science” and the attempt to wind back the Enlightenment.

Conservatives in the US struck a Faustian deal with evangelicals and conservative Christians decades ago. Now it seems the Republican Party has been “captured” by ideologues and ignoramuses.

When Glenn Beck and Sarah Palin are the movements leading intellectual lights, you know there is a problem.

Is it me, or does the thought the world’s largest economic and military superpower being populated by millions of people who reject the idea the earth goes around the sun terrifying?

Sadly, I suspect figures in Australia might not be that different.

It has nothing to do with “intelligence”.

This is why I battle against the “denial machine”.

It is but one division of the armies of darkness seeking to extinguish the light of knowledge.

134 thoughts on “Army of darkness: 33% of Americans think the sun goes around the earth”