Climategate fallout: just how high are the stakes? 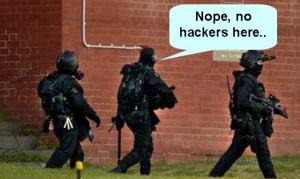 The recent report vindicating both Phil Jones and the Climate Research Unit at the University of East Anglia was greeted with a sigh of relief by many in the scientific community (viz Deltoid; DeSmogBlog; Michael Tobis). However, news recent coverage in the UK press highlights just “high stakes” the entire Climategate “scandal” and the attending fall out is getting.

The UK’s National Domestic Extremism Team has been investigating the CRU “hack”. The Guardian reports, but takes a very concerned tone:

News broken in the Financial Times that the National Domestic Extremism Team has been called in to help investigate the alleged theft of emails behind the recent “climategate” scandal is disturbing. The police unit was set up to counter domestic terrorism and extremist organisations, not investigate what may or may not have been a theft at the University of East Anglia.

The development underlines the great danger we face from the extension of anti-terrorist measures and methods into normal life – the policing of our streets, for example, and the hounding of football fans and climate change protesters.

The unit was set up to investigate “domestic extremism”. Just how “extreme” would we classify the deniers, or more importantly how do we classify the CRU attack itself? As industrial espionage, a criminal act or an act of terrorism?

Who is under the microscope?

Apparently a noted UK sceptic – one Sebastian Nokes – in the UK was questioned by the unit:

Just as disturbing is the line of questioning by the police of those who made freedom of information requests before the alleged hacking of computers last year. In a letter to the Financial Times, Sebastian Nokes, a climate change sceptic and businessman, said he was interviewed by an officer who “wanted to know what computer I used, my Internet service provider, and also to which political parties I have belonged, what I feel about climate change and what my qualifications in climate science are. He questioned me at length about my political and scientific opinions”.

His letter appeared in the Financial Times detailing his experience. The FT requires registration, so I’ve reproduced the relevant parts of the article:

The Financial Times has learnt that everybody who made a request to the university’s climate research unit under Freedom of Information rules ahead of the alleged hacking is being approached by officers searching for the culprits.

In a letter to the FT, Sebastian Nokes, a businessman and climate change sceptic, said he was interviewed at length by a detective, who “wanted to know what computer I used, my Internet service provider, and also to which political parties I have belonged, what I feel about climate change and what my qualifications in climate science are. He questioned me at length about my political and scientific opinions”.

Mr Nokes said he had sent an FOI request to the university’s climate unit asking whether scientists had received training in the disclosure rules and asking for copies of any e-mails in which they suggested ducking their obligations to disclose data.

Who is Nokes and what is his connection to the CRU?

Sebastian Nokes is a management consultant and owner of Aldersgate Partners, a company with registered in the United Arab Emirates and the UK. They specialise in “mentoring” and “coaching” senior executives and working on “corporate governance issues”.

I’ve encountered many such consultants in my professional career: some are good, others less so. As to Mr. Nokes competency in these areas we cannot say. One thing we can say, he is not a climate scientist. We will be trawling some of the more notable denialist blogs/forums for comments made my Mr. Nokes, especially in relation to FoI and the CRU.

One thing many people forget is just how much of a digital “footprint” one leaves on the Internet.

Nokes is a noted climate “sceptic”. A quick search of the FT site yields a letter to the editors in which Mr. Nokes complains about lack of access to to raw dated dated 7 February 2005. Only part of the letter is available freely, however the title is self explanatory:

Demand information audit copy if FOI request is not being met

Clearly, this has been a long running issue for him, going back to at least 2005. It would seem the unit is questioning UK residents who lodged FoI requests with the CRU including Mr. Nokes.

What can we expect from the denial movement?

Anthony Watt’s over at his clearing house for denialist propaganda has already discussed it very briefly back in January 2010:

This morning I contacted Norfolk Constabulary with a view to finding out if they had yet ascertained whether the breach at the Climatic Research Unit was a leak or a hack. I have just received a response which is frankly amazing:

Norfolk Constabulary continues its investigations into criminal offences in relation to a data breach at the University of East Anglia.  During the enquiry officers have been working in liaison with the Office of the Information Commissioner and with officers from the National Domestic Extremism Team. The UEA continues to co-operate with the enquiry however major investigations of this nature are of necessity very detailed and as a consequence can take time to reach a conclusion. It would be inappropriate to comment further at this stage.

If the persons responsible for the attack are found and arrested expect to hear the deniers mutter (actually, scream very loudly) about dark conspiracies and the abuse of power. We may be seeing the emerge of the sceptics very own “martyrs”.

They will spin this into a story of persecution, global conspiracies and the “New World Order”.

What ever the outcome, I personally hope those responsible for the immense damage that has been done to the public’s understanding of the risk of climate change are brought to justice.

The stakes are indeed getting higher.

One thought on “Climategate fallout: just how high are the stakes?”