The Herald Sun’s War on Science #1: evolution is just a “theory” 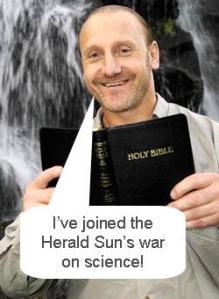 I’ll tip my hat to Tim Lambert over at Deltoid  for inspiring me. His continuing efforts to monitor The Australian’s “war on science” by casting doubt on climate science is a must read. Its a series of brilliant posts  dissecting that papers clumsy and deliberate attempts to confuse the climate debate.

The “Oz” belongs to a stable of Australian papers owned by Rupert Murdoch, which also includes Melbourne’s Herald Sun. Murdoch is also the owner of Fox News. No further comment needs to be made about just how “fair and balanced” Fox News is on science issues.

Readers of this blog, and most Australians, are familiar with the Herald Sun. It’s a tabloid with a daily circulation exceeding one million. Its web site is popular. It is also the home of Australia’s most prominent denier of climate science, Andrew Bolt.

The Herald Sun hosts Bolt’s blog, which as Clive Hamilton has noted is one the main clearing houses for denialist propaganda in the Australian media. Bolt frequently writes misleading “opinion pieces” on the issue. Readers will know I’ve commented on Bolt numerous times.

However today I am stunned. Shocked actually.

Not because Bolt has written another one of his ill-informed and misleading attacks on climate science. No, today the Herald Sun has published two page article by ex-footballer Gary Ablett. It is nothing short than a full scale assault on the theory of evolution in an Australian major daily newspaper.

What has this to do with climate change denial?

The link between the denial and creationist movements: denial and disdain for science

As readers of this blog will know, I’ve often drawn a link between the tactics of denialists and the creationist movement. Well, today the editors of the Herald Sun show their true colours and declare themselves at war with science.   Not just climate science, but science itself.

By allowing Ablett to publish his creationist drivel, they have given legitimacy to another anti-science movement. What’s next? An attack on the so “Copernican theory” or the so called “germ theory of disease?”. How about astronomy, or geology and evidence based medicine? Surely, these are future targets.

Let’s look at some of the claims Ablett makes in his two page article:

“Man might look like an ape, act like a goat, eat like a pig, think like a jackass, be as stubborn as a mule and as cunning as a fox, but a man is still a man and has been that way right down through recorded history. I openly confess to being no scientist, nor will I try to pretend to be one. However, it is not hard for the average person to understand some of the basic laws and principles within the scientific world. There is so much misinformation out there called “science”, masquerading as “truth”, and because we’ve been taught to believe these falsehoods it takes an abundance of information to get these misconceptions unseated. So please bear with me as I may need to get quite technical to get my message across….”

An attack on this thing called “science”? This is no “there are other ways of knowing” argument: Ablett simply dismisses four hundred years of science in a paragraph. Let’s go on…

“…The fact is that fossil records do not support Darwin’s theory. Experts have come to realise that the gaps in the fossil records and the absence of precursor and intermediate forms are such that they can no longer be ignored or his theory be taken seriously. It was Darwin, the author of the theory of evolution himself, that confessed in a letter to Ossy Gray on September 5, 1857 that “one’s imagination must fill up the very blanks”…”

“Let’s take another example. Evolution teaches that matter plus energy (light or heat) plus time equals biogenesis, the cause of new life.Yet our entire food industry relies on the fact that the evolutionary formula doesn’t work. For example, if you take a jar of peanut butter (matter), expose it to light and heat (energy) and add time you will never get new life (biogenesis) in that jar. And are we grateful about that! Why is new life impossible in a sealed jar? Because we are missing the most important aspect: information….”

“In the natural sciences, abiogenesis (pronounced /eɪˌbaɪ.ɵˈdʒɛnɨsɪs/, ay-BYE-oh-JEN-ə-siss) or biopoesis is the theory of how life on Earth could have arisen from inanimate matter. It should not be confused with evolution, which is the study of how groups of already living things change over time, or with cosmology, which covers how the universe might have arisen…”

Biogenesis is the process of lifeforms producing other lifeforms. From eggs we get chickens, and from chickens we get eggs. No, don’t ask me which came first. And certainly don’t ask Abblet, he’ll struggle to find the appropriate scriptural verse. Let us go on…

“..But mathematicians say there is more chance of a hurricane going through a junk yard and assembling a fully operational 747 passenger jet. Now you and I may laugh at that because we can appreciate the “intelligent design”, the information, the knowledge, the creativity and skill it takes to put something so complex together.

I assume Ablett is a fan of Michael Behe and the Discovery Institute. Ablett is no doubt ignorant of the fact that intelligent design was clearly shown not to be science in the Kitzmiller v Dover trial in the US.  To take apart the entire article and correct the errors, logical fallacies would take days.

I’d recommend people go to The Panda’s Thumb and Why Evolution is True for a real understanding of evolutionary theory. There are dozens of books out there that easily refute Ablett’s religious propaganda.

I can only shake my head in dismay at the decision of the editors of the Herald Sun in allowing the publication of this grossly misleading attack on science.

And so begins our monitoring of “Herald Sun’s War on Science”.

As a friend of mine correctly pointed out, this article was more than likely ghost written. Not only do the Herald Sun’s editorial policies need to be called into question, but we have to feel some sympathy for Ablett who is clearly being exploited.

There are people willing to trade on Ablett’s name to push their own ideological agenda. Unfortunately, it would appear Ablett is far too trusting and has allowed himself to be their pawn. By “deferring” to those in authority, he compromises his own integrity.

The Young Austalian Skeptics have picked up the story, and encourage people to write to the Herald Sun. I second that, here the contact details.  It also appears that the article plagerises a great deal of material:

Update: He also plagiarized a massive amount of his article from Grace Haven Ministries. Look at Buggery​.org for details. So this is what passes for journalism at the Herald Sun? Thanks Martin Pribble for filling us in on this one.

8 thoughts on “The Herald Sun’s War on Science #1: evolution is just a “theory””